As my Kenya Airways flight climbed out of Juba, the Nile cut through the brown countryside as far as I could see. In the last month of South Sudan’s dry season, little green can be seen. In a month and a half or so after the rainy season has started it will all be green.

An hour and a half later, as we descended into Nairobi, the vast plains of Kenya surrounding the city were lushly green and the relatively vast wealth of Kenya was easily discernible even from the sky. The drive from the airport to my hotel in the city center took me past row after row of modern office buildings and import export warehouses and assembly facilities. Kenya is a relatively modern and affluent African country. It is alive with activity. It’s rapidly growing wealth is unfortunately revealed in the infamous traffic jams along its main roads. Freeway construction has not kept pace.

Today, the front page of one of Nairobi’s daily newspapers was filled with news of the winners of the national school performance examination results, a testimony to the high value Kenyan’s place on education as an essential part if its development and continental and international competitiveness. The paper lamented the continued gap between the girls’ and the boys’ performance.

Kenya has made progress toward reducing the role of tribes in business and political life. If workers are promoted and otherwise rewarded on the basis of performance (merit), economies develop and grow much faster than those (so typical of much of Africa still) that function more narrowing long tribal lines. Then the Presidential elections in December 2007, which were expected to deepen democracy’s hold, erupted into violence along political/tribal lines when incumbent President Mwai Kibaki was declared the winner and shattered this progress. His opponent Raila Odinga was widely thought to have won. Over 800 people died and over 600,000 were displaced from the violence.

Most Kenyans were shocked by the violence of those weeks. Former UN General Secretary Kofi Annan brokered a power sharing agreement that restored peace but did not succeed in overcoming the resurgent tribalism and its poisonous effect on Kenya’s public and economic life. Ever since local newspaper headlines have been dominated by on again off again efforts to bring the perpetrators of the electoral violence to justice. The debate is between those who do not believe Kenyan institutions are strong enough to expose and punish those high government officials who are guilty and thus favor having the claims adjudicated in the Hague, and those who want Kenya to handle its own investigation. This later group includes coalition government, whose Finance Minister was accused by the International War Criminal Court in the Hague as one of the perpetrators. Like Zimbabwe, it is very painful to see such a wonderful and promising country slide backward. 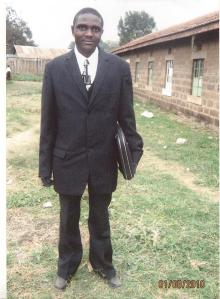 Then there is the story of Paul Oduor, pictured below. I had dinner with Paul several weeks ago in Nairobi on my way to Juba. I am still not quite sure how it came about. Several months ago I received a text message from a Kenyan phone number. I had never received an unsolicited text message from a stranger before (unlike all those messages from widows, Barristers, or bank officials in Nigeria or Benin—why Benin??—eager to deposit millions from their recently diseased husband, or client, in my bank account if I would just provided them with my account information).  He said something like, “I am a young African man, and would like to know you. Where are you?” not the usual “I am sure that you will be very surprised by this letter” favored by the fraudsters. My finger hovered over the delete button, but then I replied “I am in Washington DC. Who and where are you.” It turned out that he was in Nairobi and didn’t seem to want anything more that the adventure of connecting with someone somewhere else in the world. And, of course, I do pass through Nairobi fairly often, so we kept exchanging text messages and arranged to meet for dinner on February 18th.

Paul was a polite young man of 22 who ran a human rights organization with a partner that is affiliated with Humanists International. He was trying to educate the residence of the large squatter slum of several hundred thousand Kenyans in a square mile or so of Nairobi of their rights under the law. He gave me literature explaining the purpose of his organization. He had obviously had some training in sales, complimenting me on asking good questions. Finally I asked him how he got my phone number. He said that his mother worked in the kitchen of a hotel where we had held a workshop for some South Sudanese officials a year or two earlier and had picked up one of my papers that had the information. Maybe it was a participant list, as I don’t put my phone number on articles or other such papers. As best I can tell, Paul simply thought it would be fun to see if the far off person whose number he had acquired would respond. He never asked for money for his organization, which seemed to be a private voluntary undertaking on his part, but he did eat a hearty meal. As we parted, he said: “You are a Christian, aren’t you?” Then handed me a book called: “The Greatest Man Who Ever Lived.” Never a dull moment.

I specialize in advising central banks on monetary policy and the development of the capacity to formulate and implement monetary policy.  I joined the International Monetary Fund in 1975 from which I retired in 2003 as Assistant Director of the Monetary and Financial Systems Department. While at the IMF I led or participated in missions to the central banks of over twenty countries (including Afghanistan, Bosnia, Croatia, Egypt, Iraq, Israel, Kazakhstan, Kenya, Kosovo, Kyrgystan, Moldova, Serbia, Turkey, West Bank and Gaza Strip, and Zimbabwe) and was seconded as a visiting economist to the Board of Governors of the Federal Reserve System (1979-80), and to the World Bank's World Development Report team in 1989.  After retirement from the IMF I was a member of the Board of the Cayman Islands Monetary Authority from 2003-10 and of the editorial board of the Cayman Financial Review from 2010-2017.  Prior to joining the IMF I was Assistant Prof of Economics at UVa from 1970-75.  I am currently a fellow of Johns Hopkins Krieger School of Arts and Sciences, Institute for Applied Economics, Global Health, and the Study of Business Enterprise.  In March 2019 Central Banking Journal awarded me for my “Outstanding Contribution for Capacity Building.”  My most recent book is One Currency for Bosnia: Creating the Central Bank of Bosnia and Herzegovina. I have a BA in Economics from the UC Berkeley and a PhD in Economics from the University of Chicago. My dissertation committee was chaired by Milton Friedman and included Robert J. Gordon.
View all posts by wcoats →
This entry was posted in Juba, News and politics, Travel. Bookmark the permalink.